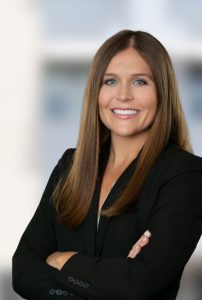 Madeline Leamon is a business litigator and counselor.  She has experience representing clients in state and federal lawsuits, including those involving claims of breach of contract, breach of warranty, shareholder disputes, and various other business claims.  She also has extensive experience counseling clients on supply chain agreements and government contracts.  In addition, Madeline has successfully resolved numerous disputes through mediation and other forms of alternative dispute resolution.

She graduated from Wayne State University Law School in May 2019.  While in law school, Madeline served as the Editor-in-Chief of the Wayne Law Review and was a member of the Wayne Law moot court program.  During her time at Wayne Law, Madeline served as a judicial intern to the Honorable Judge Avern Cohn of the United States District Court for the Eastern District of Michigan.

Prior to law school, Madeline attended the University of Michigan (Ann Arbor) and received her Bachelor of Arts in Political Science and Psychology.